Don’t hesitate to let us know how we can help you. We are here to answer any questions you might have or assist you with a project.

Join our mailing list and stay up to date on the latest smart technology news and events.

Remember when you had to go out to Blockbuster and rent a movie to get the latest flick? Or when you had to buy CDs at the store to enjoy your favorite artist’s new album? Today most people in the Indianapolis area stream audio and video content into their homes through online services like Netflix, Hulu, Pandora and Spotify. But streaming high-quality content can be difficult when you don’t have the right components or a strong network. In this blog, we’ll show you how hiring a professional AV installer can make enjoying home entertainment easier.

Sony leads the way with amazing new projectors that feature 4x the resolution of high definition!

The difference was revelatory - viewers could suddenly see tiny details that had been obscured in standard def, from the leaves on trees to the five o'clock shadow on a prime-time star's jawline. The HDTV revolution so enriched the viewing experience that it quickly made the move from high-end luxury to moviephile must-have and finally to mainstream standard.

As consumer adoption of HDTV hardware and content continues to grow, yet another video standard is making its way toward living rooms around the world. "Ultra high definition" or "Ultra HD" blows past the resolution of the current HDTV format and promises a picture quality and viewing experience that transports the viewer into the scene on their screen. Ultra HD features an exceptionally sharp display, even for viewers who sit close to the screen.

Artscreen transforms a flat panel display into a work of art. 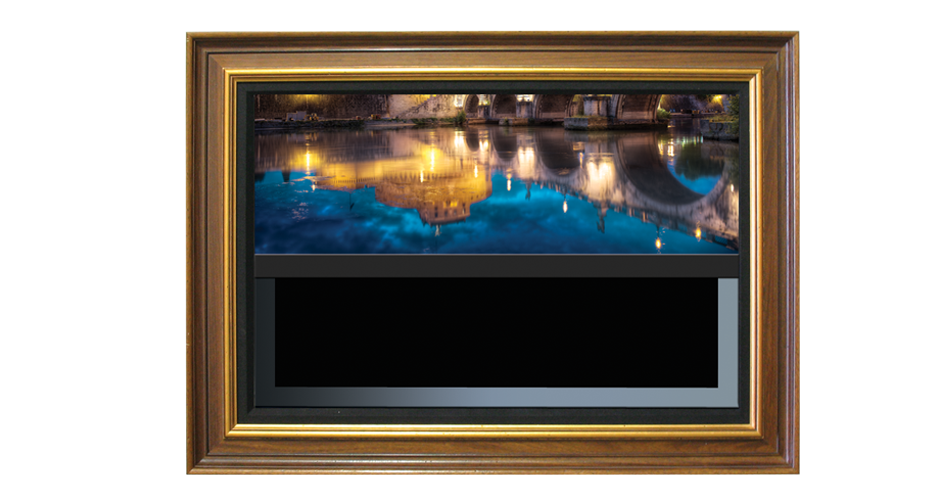 Inside a beautiful frame, the artwork ascends or descends with the touch of a remote. When the screen or flat panel display is not in use, the digital art-on canvas image of your choosing is displayed within the frame. When your artwork is retracted, the flat panel display is visible for viewing.

Our galleries display a vast array of frame styles, liners, and artwork choices for reproduction. For personalized art, custom artwork or personalized photographs can be reproduced to create an individualized Artscreen. Both recessed and surface mount versions are available to compliment any interior design or décor.

Visit our showroom to see how beautiful an Artscreen is in action, or to explore other solutions we offer to make your technology more visually appealing!